Model, Leomie Anderson, Reveals She Was Dropped From A Fashion Show because there is Room For Only "One Black Girl" 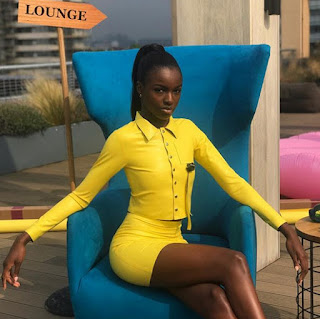 Model, Leomie Anderson, has revealed that she was dropped from a fashion show, after she was confirmed to walk the runway, because she is black. According to the model, the designer wanted only one black model.


She was only made aware of this after she sat and watched other white models prepare for the show.

According to what she told BBC Radio 4, she claims she was told that the designer "had nothing for her" and a tanned Brazilian model after, a curly-haired, mixed race model was fitted before them.

She alleges that this model filled the designer's quota for non-white models.
She however revealed she does not have the desire to name the model, but revealed that if it would help other models, especially the upcoming ones, she would name him. 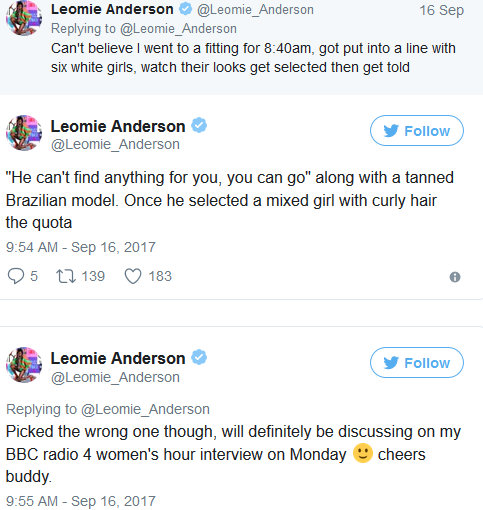 This story reminds me of the silent "war" that allegedly existed between Naomi Campbell and Tyra Banks back in the day.
According to gist, the former felt threatened by the latter because in fashion, there is this unwritten rule that there is room for "only one black girl" at the top.


"At this point in my career, I feel like me being silent is me not standing up for other young girls who are coming up in the industry. I remember when I was younger and I wasn’t saying anything, I’d be going down the runway with my face looking grey, I’d be crying backstage because nobody wanted to do my hair or someone said a comment that was really offensive to me and I didn’t say anything.

I feel like there have been a lot of situations where black models have been made to feel like second class citizens during Fashion Week or during their jobs. The only what that we are going to move forward within the fashion industry is by having new people, new blood, new ideas and a fresh perspective. A lot of the mistreatment that we go through is because fashion is a very old industry".