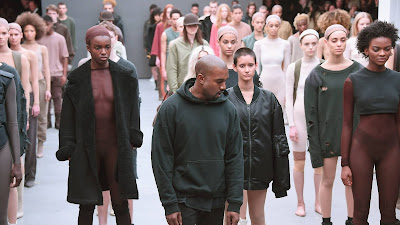 The rapper/designer  is not only the most awarded hip hop artist right now, but, this revelation also makes him the richest hip hop artist ever and also one one of the richest fashion designers. This is mostly due to his YEEZY brand which he has not just absolute creative control over, but also owns a 100% .

Kanye West told you all he was undervalued by Forbes, most peeps gave him the side eye. Turns out he was on to something after all.


According to reports by Bloomberg, the designer/producer/rapper's sneaker and apparel business with Adidas AG and Gap Inc., is valued at $3.2 billion to $4.7 billion.


His upcoming collaboration with GAP is estimated to be around $970M.

According to the report, Under the terms of the agreement with Gap, West earns royalties on sales, and his rate increases as the business grows. Plus, he’ll get stock warrants as the line hits sales targets, with the highest set at $700 million, according to a securities filing.


He also has $122 million in cash and stock and $110 million from his music catalog, alongside $1.7 billion in other assets, including estranged wife Kim Kardashian's SKIMS business.

In related gists, it has been revealed that despite the pandemic and the global uncertainty last year, Yeezy grew by 31%; almost  $1.7 billion in annual revenue. Kanye West in turn made a cool $191 million in royalties.